The Night Paris danced with the Devil

In a cacophony of dance, kisses that taste like expensive Champagne, chatter and gossip, upbeat music, flashing colours and bright lights – oh, so much light! – the devil reigned supreme at the Bal Tabarin in the centre of the art world of the early twentieth century. Dutch painter Jan Sluijters learned how to be exuberant and wild in Paris, which inspired him to create this colossal painting in his native country The Netherlands, in 1907. It is the centerpiece of an exhibition dedicated to his “wild years” in the Noordbrabants Museum in his birth town of ‘s-Hertogenbosch, capital of the Dutch burgundy region. Walking through this ancient former monastery you twist and turn past different work of this slightly lesser know Dutch master, a contemporary of Piet Mondriaan and Pablo Picasso and as much a rebel as his fellow bad boys. You get swept off your feet when your eyes are drawn towards Bal Tabarin. 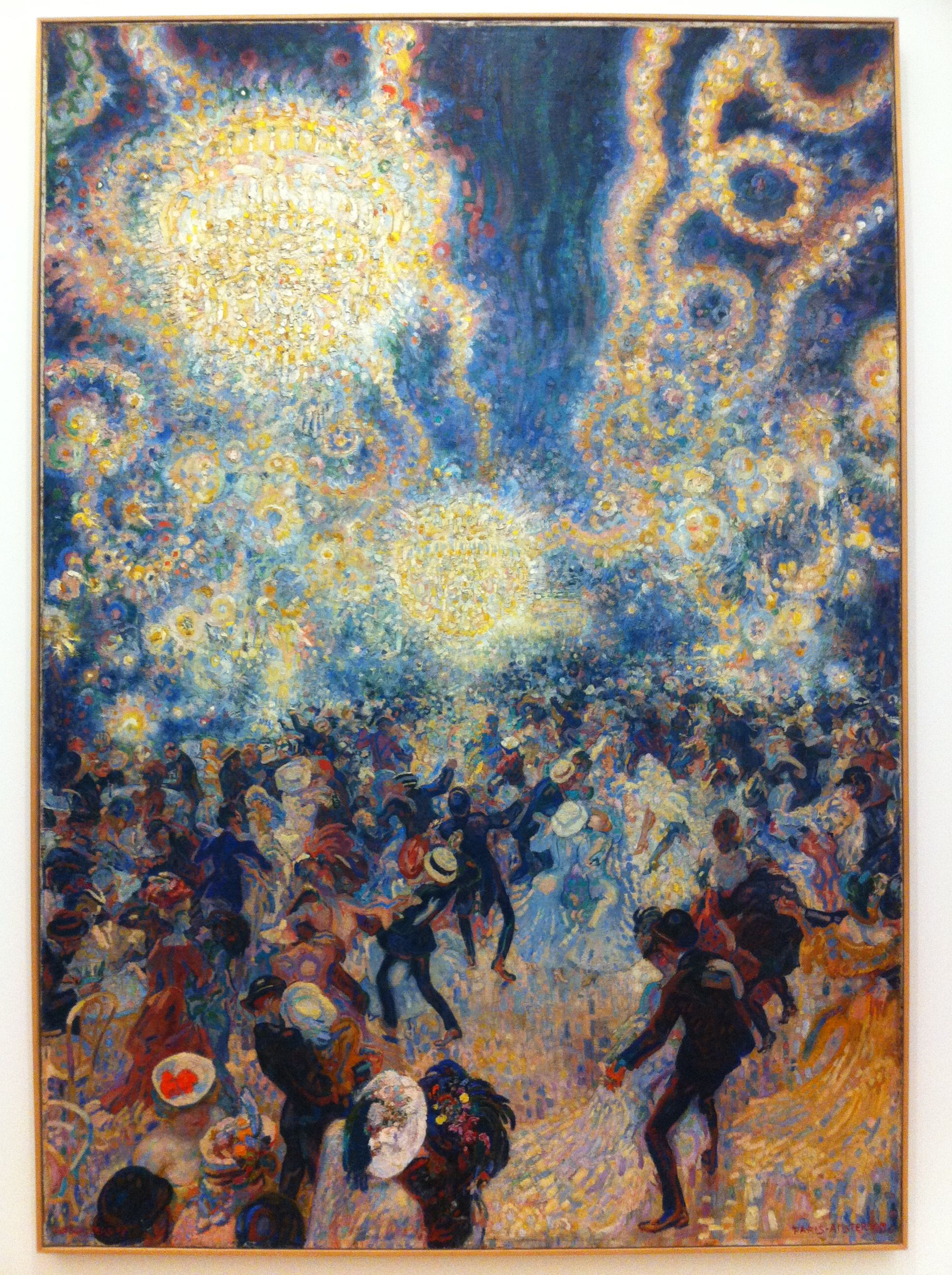 The oil on canvas appears to be alive and the longer you look at it, the more it seduces you to come inside. Give it time and you will smell the dazzling blend of different perfumes. Naked women’s chests and shoulders are wet from the eau de cologne and perhaps also the sweat of joyful dancing. Have you ever seen a woman’s breast move because her heart was beating so fast? You can find it in Sluijters’ almost apocalyptic masterpiece.

A new century is well underway and life is to be enjoyed to the fullest. Get drunk on it, as Baudelaire would say. Electricity fills the air – literally. The chandeliers are like snakes on fire, crawling across the ceiling, seducing you to explode in an orgasm of blinding light. It was Jan Sluijters’ intention with this work: an ode to electrical lighting, and boy did he succeed! Even today I can fathom that is was too much for the Amsterdam based Stedelijk Museum to exhibit. They rejected it initially. Later, when Bal Tabarin was put on display, it shocked the Dutch art scene to the core.

Yes, it is all that and more, embrace it … it is mesmerizing! Dance with the devil, like on those Parisian nights.

The Jan Sluijters exhibition is worthy of a visit. Bal Tabarin is just one of the highlights. My personal favourite is Café de Nuit, dated one year before the creation of Bal Tabarin. It has all the signs of being the announcement of the big creation that would follow. On this piece you witness two women swinging their hips in luscious style. Not a care in the world, the Great War still years ahead in the future, and at the same time … dancing like there is no tomorrow.

The Jan Sluijters expo is scheduled until 7 April 2019.

This story was written by...

Lester Wolf is the pseudonym of an almost 40-year-old writer of provocative fiction, old-school journalist and active liberal politician. His passion lies in everything "outside the ordinary", usually combined with Love & Lust. He is the father of at least two children and lives in the Netherlands.